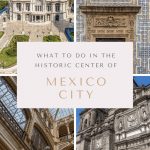 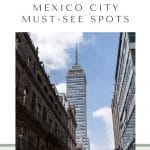 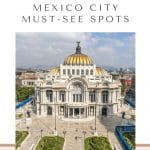 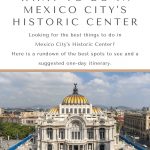 Mexico City’s Historic Center (or Centro Histórico) is the heart and soul of the city. While walking along its streets you’ll find a mix of ancient civilization and modern urbanity, and little by little you’ll stumble upon many of the must-see spots in Mexico City. If you want to discover extraordinary architecture, unique museums, and dive into ancient culture, continue reading to find all you can see in the Historic Center of Mexico City.

The historic Zócalo, also known as Plaza de la Constitución, was the heart of the Aztec city of Tenochtitlan, which today is Mexico City. After the arrival of the Spanish, the site continued being the center of the city throughout the colonial era (when it was called Plaza Mayor).

And because of Zócalo’s historic importance, this is one of the first places you should see when visiting the Centro Histórico. Also, around the plaza, you’ll find other Centro Histórico attractions like Palacio Nacional (National Palace), Catedral Metropolitana (Metropolitan Cathedral), along with many other federal buildings.

The historic long red building of the Palacio Nacional (National Palace) is the seat of the Mexican government and the official residence for the president of Mexico.  It’s located in the Zócalo, and it extends through the entire east side.

One of the highlights of the Palacio Nacional is that it houses the epic murals of Mexican artist Diego Rivera about Mexican history.

On the north side of Zócalo is located the Catedral Metropolitana, Mexico’s Metropolitan Cathedral. This colossal construction showcases a mix of architectural styles and took more than 200 years to be completed by the hands of various architects who left their contribution to the impressive building you see today.

A visit to the Catedral Metropolitana must be a part of any itinerary to Mexico City as the impressive cathedral is the first and largest in Latin America.

Museo del Templo Mayor is one of the most important places in Mexico City’s Historic Center. Here lie the ruins of the massive temple pyramid that was one of Tenochticlan’s holiest sites before being destroyed and buried when the Spanish took over the city.

After many years, the structure was then rediscovered in the late 1970s along with many artifacts that can now be seen in the museum as a window to Mexico City’s pre-colonial past.

Torre Latinoamericana is Mexico City’s equivalent to New York City’s Empire State Building. This building was once the tallest one in the city, but until today it remains one of the tallest in the Centro Histórico.

On the 44th floor of Torre Latinoamericana, you’ll find an open-air observation deck where you can have striking 3600 views of the city (tickets can be bought online in advance). On a clear day, this view can include the volcanoes Popocatépetl and Iztaccíhuatl.

Casa de Los Azulejos is a building in Centro Histórico that is distinguished by its façade covered in blue, white, and yellow tile (like the tiles found in Lisbon). The house was once the home of an aristocratic family, a workers’ organization, until late became the most charming location for a restaurant chain.

And even if you don’t want to eat at Casa do Azulejos, you can still enter to admire the interior patio.

Palacio Postal, or Correo Mayor, is one of the most distinctive architectural landmarks in Mexico City. This postal office may look like something coming out of a movie with its glass-domed ceiling, marble floors, gold cashier counter, old-fashioned elevator, and imposing connecting staircases.

And since it’s still operating as a post office, while here you can take the chance to buy a few stamps and send a postcard back home.

One of the most iconic buildings in Mexico City, Palacio de Bellas Artes (Palace of Fine Arts) is actually located in Alameda Central, but since it’s at the outer edge of Centro Histórico, it deserves a spot here.

You’ve probably seen many pictures of this building when searching for Mexico City – and it’s not a coincidence! The Palace is one of the symbols of the city and the oldest and most important art museum in Mexico.

And on the top floor, there’s the Museo Nacional de Arquitetura with building floor plans, photos, and other archives related to the historic buildings of Mexico City.

Pro tip: the best views of the Palacio de Bellas Artes can be found at Finca Porfirio, a café located on the 7th floor of the Sears in front of the building.

Places to eat in the Historic Center of Mexico City

How to get around Centro Histórico

The best way to see many of these attractions in Centro Histórico, like in other neighborhoods in Mexico City, is by foot.

If your hotel is in another neighborhood, you can reach Centro Histórico by metro (Zócalo station) or via Uber, which is an easy and convenient way to get around Mexico City.

Here’s a suggested itinerary to see the best of Mexico City’s Historic Center in one day:

Start your day in Centro Histórico at Templo Mayor. After the museum, head on to Zócalo to see Palacio Nacional, Catedral Metropolitana, and the surrounding buildings.

Then, continue walking your way through the Centro Histórico to take a look at Casa de los Azulejos. On your walk here, you’ll probably see the Torre Latinoamericana, so now is your time to go up to the 44th floor if you want to.

After, walk towards Palacio de Bellas Artes where you can either go in to see the interior or go to the café for its strategic viewpoint.

Mexico City is a big metropolis and, like in others around the world, it’s wise to be cautious. Avoid excess jewelry and be mindful of your belongings. Also, Centro Histórico isn’t the best place to wander at night.

What to Know for Visiting Mexico City

Mexico offers visa exceptions to visitors from various countries, including the US and the European Union, for stays up to 180 days.   Also, at the moment, there are no covid-19 restrictions for entering Mexico. Travelers don’t need to present proof of vaccination to enter the country, nor negative covid-19 test results. However, when planning your trip to Mexico, be sure to check the latest information and requirements for your specific country.

The voltage in Mexico is 127 V, and the power plugs and sockets are type A and B (the same as the US).

The currency used in Mexico is the Mexican Peso (MXN). You can check the current exchange rate on Google.

The best time to visit Mexico City is during spring or fall (from September to November and from March to May).  Summers are typically rainy, and winters are chilly.

Where to stay in Mexico City

I recommend booking your hotels on Booking.com to get the best rate and other perks such as genius discounts and free cancellation if your plans change.   Some of the best hotels to stay in Mexico City are:

While in Mexico City, going on a day trip is one of the best ways to explore the sights near the city. So, here is a curated selection of the best tours from Mexico City.